As I kick off this new feature (which I introduced here), I am grateful for two things: firstly that I got to watch a good film, and secondly that it was a movie I had never seen before. I knew very little about 2001: A Space Odyssey before watching it, other than it was directed by Stanley Kubrick, it had a very famous soundtrack, and it was probably going to be set in space (just a hunch, you know!). I’m a big fan of Kubrick’s A Clockwork Orange, and was aware that 2001 is generally considered as Kubrick’s masterpiece, so I did have very high expectations. However my exceptions weren’t just met, they were surpassed in ways I never expected.

Released in 1968 (which is staggering in itself considering the quality of the effects), 2001 is as fresh and exciting today as it was then. When I had finished watching, I was at a complete loss for words. I hadn’t felt this blown away by a film in a very long time. I immediately wanted to read  more about it, theories, essays, fan thoughts, and pretty much everything else I could get my hands on! Last time a film made me feel like this was Interstellar coincidently, a film which you could draw a lot of parallels with 2001. Like Interstellar, 2001 is bigger than the film itself, with a plot, a message, and an ending which will leave you scratching your head, and desperate for more answers.

The story is a parable about the evolution of man, beginning with the dawn of man. The first 25 minutes of the film are dialogue-free, with the story being told through striking visuals and music. A group of apes discover a mysterious black monolith, and learn to use discarded bones first as a tool, then as a weapon. Then comes possibly the greatest jump cut in cinema history, and suddenly we’re in space and in the distant future (or what would have been the distant future at the time anyway). The monolith discovered by the apes appears again on the moon, and then leads a group of astronauts on a mission to Jupiter where they believe it is sending signals. Bear with me on this one, but supposedly the monolith is there as a symbol or measure of how far man has progressed over time. It gave the apes the tools they needed to be civilised, pointed man farther out into space, and gave man the ability to develop extremely advanced artificial intelligence (AI), as shown in the robot HAL 9000 (we’ll come back to HAL). Finally, in the last act, the monolith appears again, taking man to the next step in his evolution, becoming a supreme being, outside of time and space. Phew, hopefully that all makes some sense! This reddit thread has a really helpful explanation as well if you wanted to check that out.

Despite a pretty complicated story and themes, there is so much to enjoy in just watching the film. It is after all a visual masterpiece – the cinematography is simply stunning, each shot is like a work of art, and so carefully considered. It was difficult to choose my favourite shots, but here are a few of my favourites: 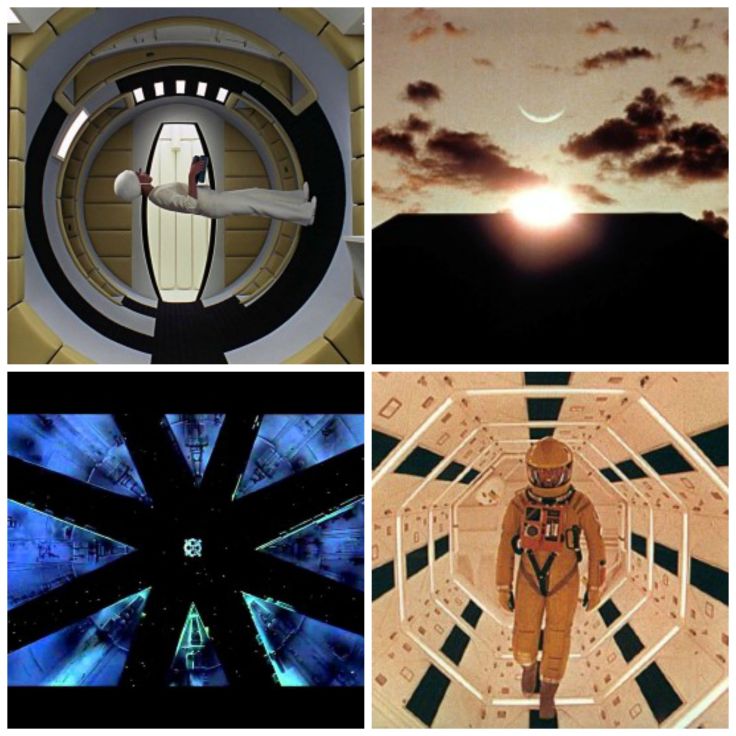 Kubrick’s directing and vision in 2001 are incredibly bold, particularly for the time period. There are long lingering shots, extended periods of silence, and a heavy reliance on the visuals and music doing all the talking. Quite simply it is beautiful to look at.

It is darker than I expected for a ‘U’ certificate as well; it’s certainly no A Clockwork Orange, but the bits with HAL are very creepy indeed. The tension created in just a voice and a red light is incredible! Whilst it demonstrates how far technology has come, it also is a warning about creating something which is  too powerful, and capable of independent thought. This was probably pretty scary in 1968, but perhaps even more so in 2015 as we can see how far technology has come since then – even in my 24 years on earth, the things we have now were almost unthinkable even 10 years ago. It does make you wonder how much further technology can go in my lifetime and beyond. It means that 2001, despite being 47 years old, isn’t really out of date at all.

Having now seen 2001, it’s continuing influence is clear to see in so many modern films. I’ve already mentioned Interstellar, but it is also easy to see the influence of Kubrick on other space films such as Gravity. The idea of an AI rising up against the humans is something which countless films have done since, including Alien, and even Disney Pixar’s Wall-E. This all goes to show what a truly iconic film 2001 is and one which will continue to influence for many more generations to come, I’m sure. You can check out a full list of all the films and TV programmes which have referenced it here.

I said I wasn’t going to give the Movie 50/50 films a rating like I do with my normal reviews, but seriously you have to watch this film! If you’ve watched it before, then watch it again. If you’ve never watched it then watch it right now, and then probably watch it again because it definitely needs repeated viewings to be fully appreciated. It is fully justified in its spot in the IMDB top 250, and I highly recommend that you watch, experience and enjoy!

Love or loathe this film? Let me know in the comments below.

I flipped a coin, and it was heads again which means I get to watch another (hopefully) good film. Phew, safe for another month! I randomly generated number 185, so the film I will be watching is Million Dollar Baby. Remember you can get involved and watch the film as well, tweet me your thoughts using the hashtag #Movie5050. Don’t forget, new posts every Monday and Wednesday, and Movie 50/50 will be back October 5th.