What started as a film about the glamorous, gritty world of illegal street racing, seven films later Fast & Furious is one of the most ludicrously successful action movie franchises of recent years. Each film seems more over the top than the next, with action scenes seemingly designed to outdo the previous ones. But which one is the best? Well, we’re about to find out! 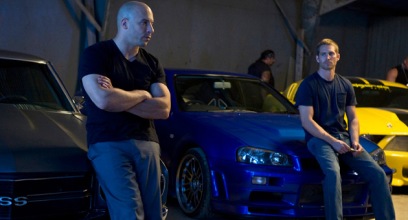 Despite Dom Toretto (Vin Diesel) making a welcome return to the series, this lazily titled fourth film in the Fast series is easily the weakest. Sitting awkwardly between the also ‘not that great’ Tokyo Drift and the amazing Fast Five, Fast & Furious does a good job of setting up the future storyline with Letty (Michelle Rodriguez), but otherwise it is completely forgettable. Having Brian O’Connor (Paul Walker) in the cop role again doesn’t quite work, and despite some big action scenes, the pacing is off, so the film drags.

This always used to rank lowest on my list until I watched Fast & Furious again and realised that whilst they’re both bad, Tokyo Drift probably has more memorable scenes and that just about gives it the edge. The city of Tokyo makes for an awesome backdrop, and the street racing scenes are great. In terms of its story, it sits somewhere between Fast & Furious 6 and Furious 7, therefore it makes more sense to watch it between 6 & 7 rather than after 2 Fast, 2 Furious. It suffers for not having the main cast in it, and if you’re watching all the films, you’re not going to miss much if you skip this one.

I really like the character of Roman (Tyrese) in the Fast series, but this film pushes the comic relief too far. The storyline isn’t in any way connected to any of the later films, so it works as a standalone “buddy comedy”, but not much else. The scene where Brian and Roman launch a car onto a boat seemed completely ridiculous and unnecessary at the time, but in hindsight compared to what happens in the later films, it is totally believable! Maybe that was setting the tone for what was going to come in the later films.

The start of the franchise, and whilst it looks very tame in comparison to the action of everything post-Fast Five, it establishes the relationship of Brian and Dom, and has the best racing scenes, hands down – the race at the end between Brian and Dom is still thrilling to watch. It looks oddly quaint when you compare it to the later films in the series, and whilst the change of direction was needed for the franchise to run for as long as it has, it’s still worth looking back on with fondness!

Introducing Dwayne Johnson to the cast in Fast Five pretty much resurrected this entire series and gave it a much needed new lease of life. In this film we see him having to work with the Fast family, much to his disapproval. All of his scenes as the burly Hobbs in Fast & Furious 6 are fantastic. It’s also great to have Michelle Rodriguez back as Dom’s love interest, Letty. The fact she has been turned and doesn’t remember any of her old friends adds an interesting dynamic. Also who can forget the plane climax with the world’s longest runway? Ridiculous and totally brilliant.

It is extremely difficult to talk about this film without mentioning the tragic death of Paul Walker which overshadows it. Walker died in a car accident half-way through the filming of Furious 7, and the director James Wan has to be commended for doing such an amazing job with the little footage he had. The stunts and action pieces in this film are some of the most ridiculous and over the top scenes in any of the Fast films, but also the fight scenes are brilliant. Jason Statham is a welcome addition to the cast as Deckard Shaw, and the fight scenes between him and Hobbs, and him and Dom are some of the highlights. The ending is incredibly moving, and a beautiful tribute to the late Walker. I’m glad that they didn’t kill him off in the series, but instead came up with an ending that both makes sense in the context of this film, pays tribute to his contribution to the films, and also means the “family” and the series can carry on without him.

After the dreary and dull Fast & Furious, who could have even imagined that Fast Five would be as insanely brilliant as it is? As already mentioned, even as far back as 2 Fast 2 Furious, and some of the action scenes in the preceding Fast & Furious, there were hints at the madness to come, but nothing could prepare you for the full-throttle insanity that is Fast Five! The plot isn’t important and the bad guy is pretty forgettable, but this film marked the turning point for the franchise and provided the benchmark for all the ones which will follow it. It’s the first film where you really get a sense of the “family” dynamic the characters have which is a strong theme that continues from here, and is particularly evident in Furious 7. The scene in which the team steals a safe, and the general chaos which ensues is probably the most memorable scene in all of the films. Fast Five set the bar pretty high for the new direction that this franchise took, and whilst they’ll probably be making these films forever, I’m still not sure they’ll be able to top this!

So what do you think? Would you rank the films any differently? Let me know in the comments, and don’t forget to share with your friends also!