So you’re probably familiar with Pixar. In their collaborations with Disney, they’ve made some of the best animated feature films of the last two decades, including Toy Story, Finding Nemo, Wall-E and Rataouille. However, long before they were making feature length films, Pixar made some incredible short films – something which they have continued to do over the last 20 years. New feature length releases always have a short 3-5 minute film preceding them, and they’re all amazing!

Please note this list only includes the original animated shorts, not the ones which are feature related and include characters from existing Pixar feature films. (E.G. Mike’s New Car, Jack-Jack Attack)

Here are my top 10 Pixar Shorts! Let me know your thoughts in the comments below. 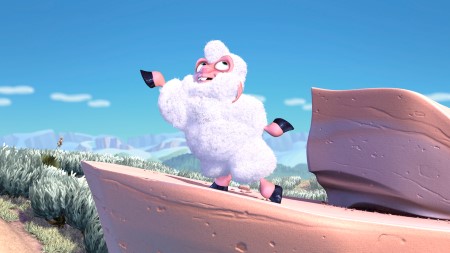 Boundin’ is a simple tale, but one with a great message (as we would expect from Pixar). A preening sheep loves to dance and show off his glorious wool coat, however when he is sheared he feels down in the dumps and his friends mock him. A passing Jackalope teaches him that it doesn’t matter what you look like, and shows him the benefits of boundin’ (bouncing essentially) rather than dancing, and literally as well as metaphorically gets him up when he is down. The sheep no longer fears the shears and spends his days joyously boundin’ away. This musically narrated tale isn’t the cleverest Pixar have ever done, but it’s cute, very catchy and has a wonderfully upbeat message about learning to love your flaws and not caring what other people think.

For the Birds is a story of karma essentially! A flock of small birds squabble over personal space on a telephone wire, but are soon interrupted by their chirpy, large and slightly awkward looking neighbour trying to befriend them. They make fun of the new arrival who then, ignoring their jibes, decides to join them on the wire, much to the flocks annoyance. The smaller birds try to push him off the wire, and then when he is hanging by his claws, peck away at him to try and make him fall off the wire. In the process they have failed to notice that they’re getting closer to the ground and in fact if the larger bird falls they will be catapulted into the air. The inevitable happens and the small birds are dazed, featherless and now the laughing stock of the larger bird. Oh how the tables have turned! For the Birds is very, very funny and demonstrates Pixar’s amazing ability to take an incredibly simple idea and tell a great story through nothing more than facial expressions (and chirping!). Simply great! 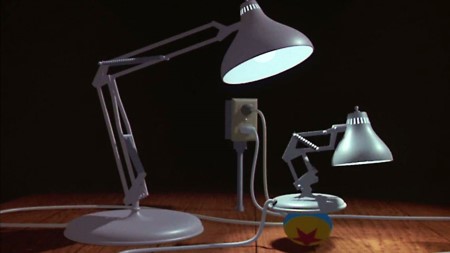 Released in 1986, Luxo Jr didn’t appear in cinemas until 1999 alongside Toy Story 2. If you’ve ever wondered why the Pixar logo has a hopping desk lamp in it, then wonder no more! The animation in Luxo Jr is very basic, although revolutionary for it’s time. There isn’t much of a story here, essentially it is just a small lamp who hops about and plays with a ball, whilst being watched by Luxo Sr. Despite a small storyline and concept, there was huge significance in this short. Luxo Jr showed just what was possible with computer animation and also demonstrated how Pixar could take a normal everyday item and give it sentience, feelings and emotion. Their animation might have come on leaps and bounds since then, but it’s still an incredible piece of work. 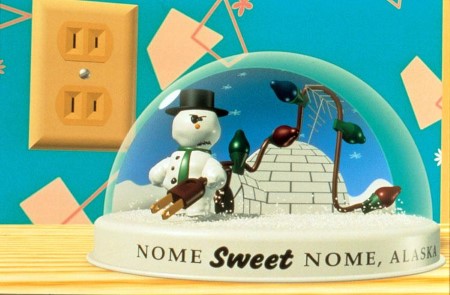 Easily the funniest Pixar short, Knick Knack tells the story of a snowman imprisoned in a globe who wishes to join the souvenirs (or knick knacks) from sunnier climes on the shelf, particularly the mermaid from “sunny Miami”. Unfortunately his escape attempts fail and he ends up falling from the shelf and into a fishbowl. Just when he thinks he has his freedom and a new companion (a mermaid from “sunny Atlantis”), his snowglobe falls in after him, trapping him once again just within arms reach of the mermaid. Knick Knack is unusual in the sense it doesn’t have a deeper message, or even a happy ending, but it is hilarious and has a soundtrack which you will be singing all day.

There’s not a lot to be said about the plot of La Luna, it really is one you just have to watch and see what all the fuss is about. You’ll probably spend most of it trying to figure out what exactly is going on, but try and switch your mind off and just take it all in. It’s a visually stunning story of a young boy learning the family trade, with a beautiful soundtrack, and the ending will take your breath away. I’ll leave it at that, just trust me on this one! 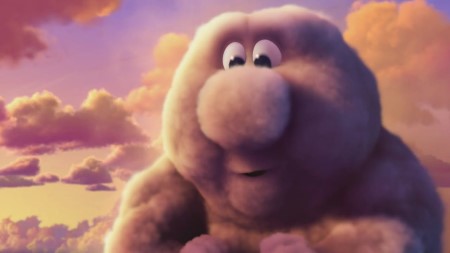 This short is adorable basically! It puts a clever spin on the idea of storks delivering babies, and shows us that the clouds are the ones who make the babies to then give to the storks. Whilst all the white fluffy clouds are creating bouncing babies, cute kittens and playful pups, one well-meaning grey cloud only seems to be able to create critters that are less cute and cuddly. His stork companion becomes increasingly frustrated at having to transport crocodiles and porcupines and leaves in a huff. When he sees how upset the cloud feels, he puts aside his own feelings, and learns to work with him rather than against him. It’s a lovely message of friendship, accepting each others flaws and working together. Plus it’s so damn cute. 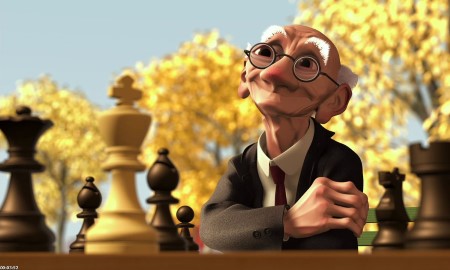 If you haven’t seen this charming short before, you might recognise the character of Geri as he later appeared in Toy Story 2. Geri’s Game is the story of an old man playing a very competitive game of chess with himself in the park. At first we see him slowly get up and walk around to the other side, but this is soon swapped for quick cuts so that we almost forget there is only one man playing! It’s so cleverly done, and the twist at the end (I won’t ruin it for you!) will leave you smiling for a long time afterwards. This was the first Pixar short to feature a human main character and proved Pixar were just as good at animating people as they were inanimate objects. It quite rightfully won an Academy Award for best short film, and it still shines as one of Pixar’s very best. 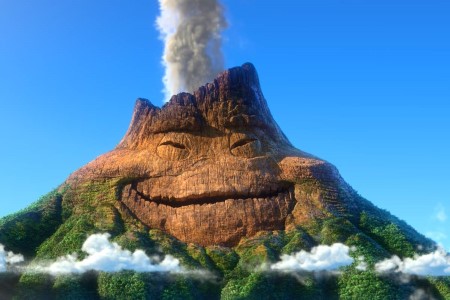 A love story about a singing volcano. Sure why not! Lava is Pixar’s most recent animated short, and if you didn’t think a volcano could make you cry then you are wrong! Preceding the equally emotional Inside Out (I reviewed that here), Lava is the sad tale of a lonely volcano who just wants somebody to love (or “lava”). The song, sung by Hawaiian artists Kuana Torres Kahele and Napua Greig tells the story, just as the volcano uses his own song to express himself. The animation is beautiful, the song is amazing, you’ll cry but yet you’ll leave smiling. Amazing. 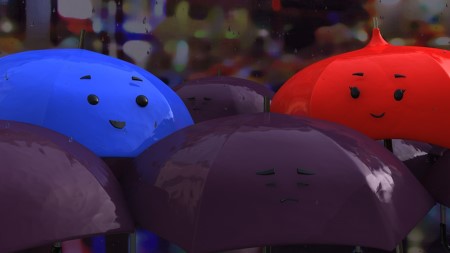 Pixar take the classic formula of ‘boy meets girl’ and puts a fresh take on it, showing us the meet cute of two umbrellas, one blue, and one red, as their owners pass on a bustling rain-drenched street. It also incorporates the simple pleasure of “finding faces in objects”, and like a lot of other Pixar shorts, the story is told only through facial expressions and music. The Blue Umbrella is an instant Pixar classic, and once again shows us that their ability to make us feel things for usually inanimate objects is unparalleled. It also pioneered new “photo-realistic” animation techniques, making it feel even more real, and stunning to watch. 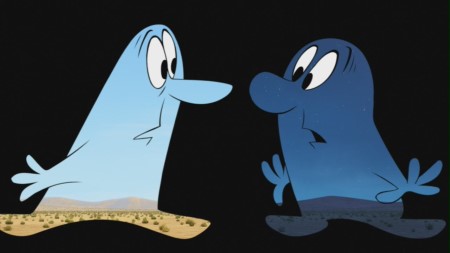 Unquestionably the best Pixar short to date! Day & Night combines all the great elements of a Pixar short; great characters, clever concept, fantastic coupling of music and imagery, and that all-important positive message. In this short, Day and Night are two characters with screen-like bodies. Day’s body shows a bright sunny day, and Night’s shows a starry moonlit sky. When Day and Night first meet each other, they’re cautious, but soon grow jealous of each other due to the events being shown inside them. Night in particular is very envious that Day gets to enjoy a bikini-clad girl sunning herself on the beach! Eventually they recognise that each of them have their positive sides, Night’s version of Las Vegas is much better than Day’s after all, and they begin to like each other. By the end they see the things they saw in themselves in each other and as Day becomes Night, Night becomes Day. That’s a lot to pack into just over 5 minutes, and I’ve barely even scratched the surface on the amazing visual gags, and the perfect marriage of sound and visuals. You need to watch if you haven’t already, and you’ll soon see why it is unbeatable!

What do you think? What’s your favourite Pixar short? Let me know in the comments, and don’t forget to share with your friends.