In the never-ending debate of whether the book is better than the film or the film is better than the book, I guess there can’t be a clear answer as it will always come down to personal opinion. Some people will prefer the level of detail you get in the book, and hate when the films cut bits out. Other people will love seeing the characters they have imagined in the pages of their books come to life on the big screen, and end up preferring the film interpretation over the book.

Personally I’m somewhere in the middle. When there is a film adaptation of a book out that interests me, I will try and read the book first. Most recently, I rushed through Paper Towns before seeing (and reviewing) the film adaptation. Other times I have seen the film and then felt inspired to check out the book. Whilst some changes they make from the book to the film I don’t agree with, I understand they are both very different things, and people will always have their preference. Each have their own merits as well; whilst the books can give more detail, the films put a face and a personality to the characters you have previously read about.

In this post I’m going to look at some books and films that I have read and watched, and pick which one I think is the best. Of course this will all be my own opinions, so let me know your thoughts on the ones I have talked about, and also your general thoughts on film adaptations of books in the comments below.

One Day (by David Nicholls)

The story: Set on the same date each year (St Swithun’s Day to be precise), One Day follows the lives of Dexter and Emma who first met at university. It follows the ups and downs of their complicated friendship and the events that occurred during that time.

What did I read/watch first?: I read the book first. I saw the film was coming out and it looked interesting so thought I’d better read first so I could find out what I was letting myself in for.

Which is best?: I love the film, but I think in this case the book wins. The film has far too much foreshadowing whereas the tragic event in the book comes as a complete surprise. I also wasn’t a fan of Anne Hathaway’s performance as Emma. I had a very clear picture in my mind of what she should be like, and she didn’t quite live up to it; her accent in particular was way off.

The story: Mysterious Margo Roth Spiegelman has a habit of disappearing, and when she seemingly leaves behind a trail of clues, lovestruck Quentin vows to do everything possible to try and find her.

What did I read/watch first?: The book, but only just; I finished it about 2 days before I saw the film!

Which is best?: I’ve debated this one for a few weeks now, but I think that the film just about wins. The focus of the film is very different which I think I prefer, and also the book has an incredibly long and boring middle section which I couldn’t wait to get through. The film drags a bit in the middle as well, but it didn’t feel quite so laborious.

The Hunger Games (by Suzanne Collins)

The story: In a dystopian society, residents of twelve districts are ritualistically plucked at random to take part in the annual Hunger Games; a barbaric fight to the death which is televised for the amusement of the rich residents of the Capitol.

What did I read/watch first?: I read all three books before the first film even came out. I was a big fan!

Which is best?: This is difficult to call as there is still one more film to go, but I think I prefer the books. Not to say the films aren’t great, but the books just go into more detail about the world and the different districts, giving the story more depth. I cared more about the characters as they appear in the books than they do in the films. That being said, Mockingjay (Part 1) was far superior to the book; in my opinion the weakest in the trilogy. The portrayal of Katniss in this particular part of the story was handled much better on film. 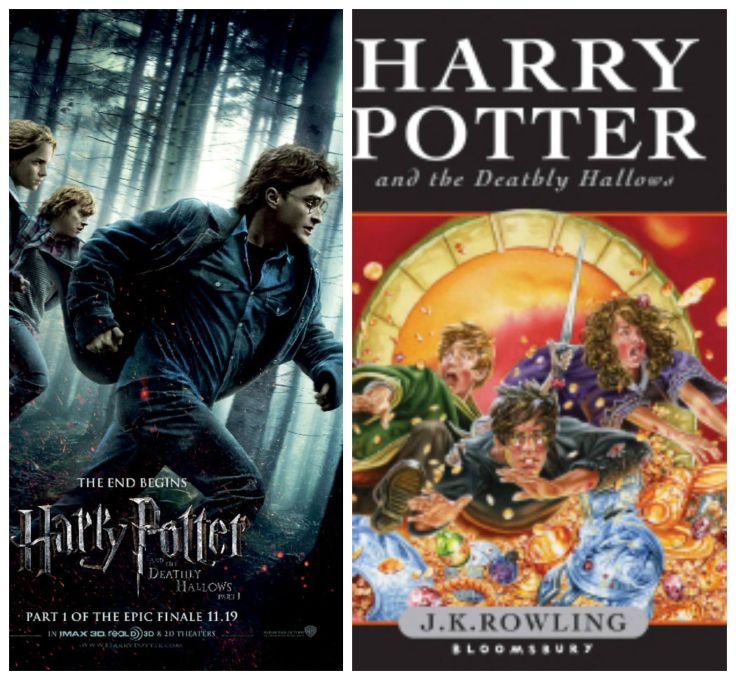 The story: Harry Potter finds out on his 11th birthday that he is a Wizard, and not just any Wizard, but ‘The Boy Who Lived’; also known as the only one who the Dark Wizard, Voldemort, was not able to defeat. The series follows Harry as he attends Hogwarts School of Witchcraft and Wizardry, and the various dark and dangerous adventures he faces.

What did I read/watch first?: Ok so slightly complicated, I saw the first two films and then read the first two books, and then after that I read the book before seeing each film.

Which is best?: I love both, and they’re both amazing in their own ways, however as someone who grew up with these stories, I think it has to be the books. It was amazing to see this magical world on the screen, but even more amazing to have it come to life through the way JK Rowling was able to describe it in the pages of her books.

The Lord of the Rings Trilogy (by JRR Tolkien) 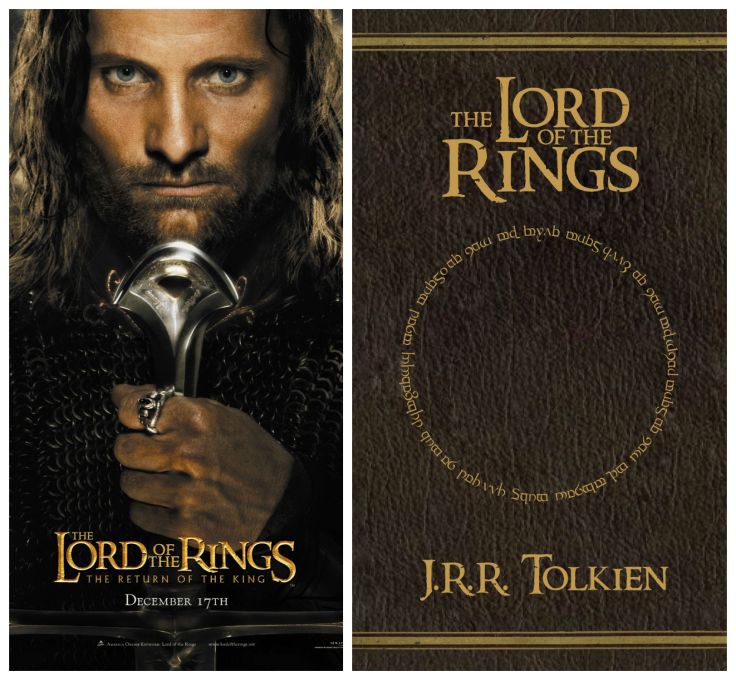 The story: An unlikely hero, Frodo the hobbit, is tasked with destroying the object of absolute power, The One Ring. Accompanied by a fellowship of friends, he must make the long journey from his home in the sleepy Shire to the fires of Mount Doom.

What did I read/watch first?: I saw all three films before reading any of the books.

Which is best?: Sorry to everyone in advance who loves the books, but I just could not get into them, so it has to be the films. The mythology Tolkien created is incredible, but there is just so much detail in the books that I think it loses some of the story. The films did an amazing job of showing this huge and expansive world, but never losing sight of the story.

The story: After moving to Forks to be with her Dad, Bella Swann soon becomes the fascination of mysterious Edward Cullen, who unbeknownst to Bella is in fact a vampire.

What did I read/watch first?: I read the first book before seeing the film, but then didn’t read the rest of them until after Breaking Dawn (Part 1) was released. Confusing, I know.

Which is best?: I mean, they’re both not great I guess (sorry to the die hard fans), but due to the fact the writing is absolutely terrible, I think the films win this round.

The Fault in Our Stars (by John Green) 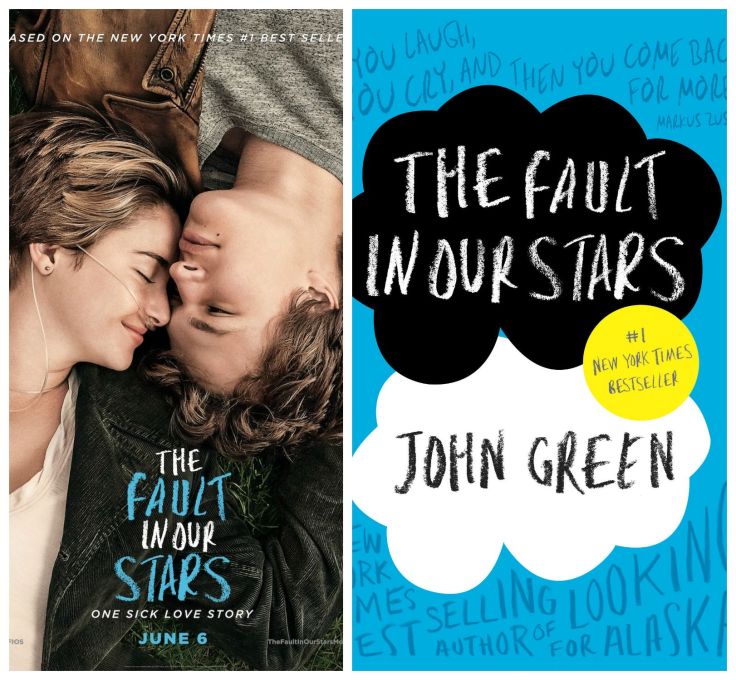 The story: Hazel and Gus are star-crossed lovers who meet at a teen cancer support group.

What did I read/watch first?: I read the book first, and was glad that I did so that I could emotionally prepare myself for seeing the film!

Which is best?: Again, I love both, but think it has to be the book. Green’s writing is so wonderful and so intelligent, that I absolutely couldn’t put it down. The film is a very faithful adaptation though and one which changed very little from the original story.

The story: Raoul Duke is Las Vegas bound, with his attorney in tow and a whole trunk full of every single narcotic you can imagine.

What did I read/watch first?: I saw the film first, and it immediately made me want to read the book.

Which is best?: The film, easily. Terry Gilliam’s insane vision brings this equally insane world to life in ways you could never have imagined. Also Johnny Depp is amazing as Raoul Duke. A cult classic!

A Clockwork Orange (by Anthony Burgess)

The story: In a futuristic, totalitarian society, we meet Alex, the young leader of an extremely violent gang who wreak havoc on everyone they come into contact with. After he is imprisoned, Alex is subjected to some controversial therapy to try and cure him of his violent tendencies.

What did I read/watch first?: I studied this film when I was doing Media at college, and then read the book because I loved it, and also wanted to have a deeper understanding of the storyline.

Which is best?: Each great in their own way, I think the film is best. The “nadsat” slang language in the book is quite difficult to overcome and is massively toned down for the film. The “ultra-violence” committed by Alex and his droogs is even more shocking when seen on screen as well.

The Chronicles of Narnia Series (by CS Lewis)

The story: A group of children discover a portal to a magical world full of unusual creatures, exciting adventures and dark forces.

What did I read/watch first?: I read the books a very, very long time ago!

Which is best?: Definitely the books. I loved the film adaptation of The Lion, The Witch, and The Wardrobe, but the others were poor in comparison. Also, when are they going to make the film of The Magician’s Nephew? Easily my favourite book in the series, but it seems the films are on hold for now so could be a while before we see it. 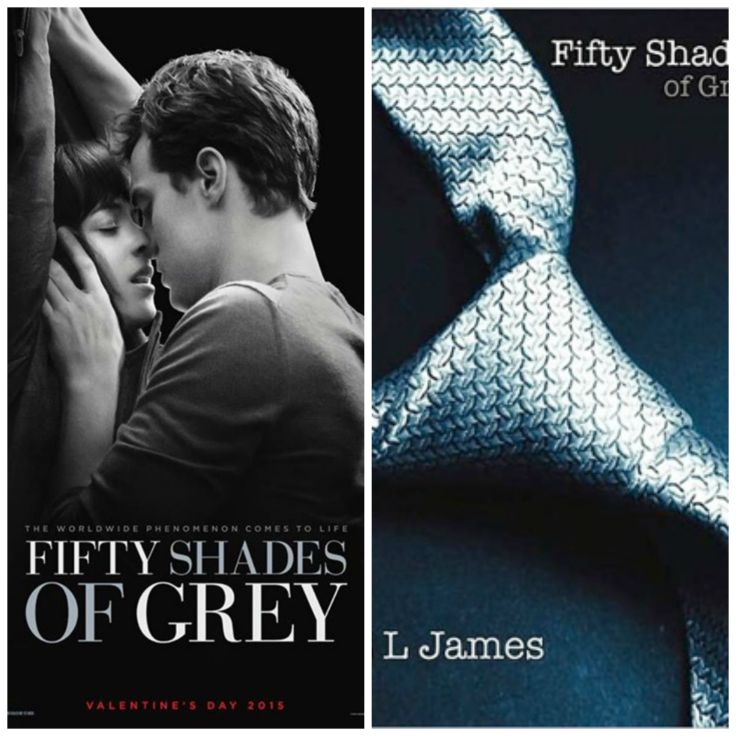 What did I read/watch first?: Unfortunately I read all three books before the first film was released.

Which is best?: Let’s be honest, they’re both terrible! The writing in the books is godawful, and inevitably the film script is just as bad. Its legions of fans will say otherwise, but these books/films are all hype and no substance.

Tallying up the results, the books have 5 and the films have 5! Well, I did say I was pretty much split down the middle..! Don’t forget to let me know your thoughts in the comments, and please share with your friends as well.

2 thoughts on “Book vs Film”