With less than two weeks to go until the biggest awards show, The Academy Awards, here is the next post in my series of preview posts before the big event!

Having now seen all of the Best Picture nominees, here is my ranking of them. This is not necessarily who I think will win, but rather how I would rank them in terms of enjoyment and quality.

Please let me know your favourites in the comments at the end. 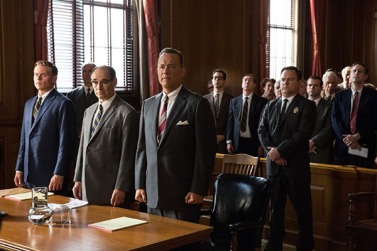 This film isn’t terrible, but I really don’t think it deserves its place on this list. I can see why the Academy put it here; stars Tom Hanks? Tick. Directed by Spielberg? Tick. However whilst it is undoubtedly a well made film, it lacks that extra special something which makes it worthy of winning the big prize. I’ll eat my hat if it wins.

I really enjoyed this film, but it’s not one I am in a hurry to revisit. It did a great job of taking a not altogether thrilling subject matter, and turned it into a funny and entertaining satire, playing on how easily we’re distracted to great effect. Great performances from Christian Bale and Steve Carell, and the fourth wall breaks from Ryan Gosling, make this a fun, interesting, and different film.

I really loved this film when I first saw it, and hoped it would get some recognition at the Oscars. It’s gorgeous to look at, with a stand out performance from Saoirse Ronan. It’s a sweet and simple tale of love and find yourself, but isn’t as saccharine as it could’ve been. There’s some real heavyweights in this category which sadly might push Brooklyn into the background a bit, but it’s a great, underrated little film, which is absolutely worth checking out if you haven’t seen it already.

This was a big surprise for me, and a real return to form for Ridley Scott. Matt Damon is great, in what is almost a one-man show for parts of it, and it is a really uplifting story of hard-work, determination, and logic winning over an unimaginable situation. I thoroughly enjoyed this film, and it absolutely deserves it’s place with these nominees.

This film. It completely blew me away in ways I never thought possible, and is a staggeringly wonderful film. The subject matter may be grim, but it is full of hope, and shows the unbreakable bond of a mother’s love in powerful and beautiful ways. An absolute must-see, and not just one of the greatest films of the year, but one of the best films I have seen in a very long time.

An Oscar-worthy performance from Leonardo DiCaprio, staggering technical feats in film-making, and one of the most beautifully shot films I have ever seen, The Revenant has all the makings of a classic. It is mind-blowingly good, a film which needs to be experienced on the biggest screen possible. It is totally immersive, all-consuming, and utterly fantastic. If you haven’t seen this film yet, then what are you waiting for?!

Firstly, let’s take a moment to applaud the fact that the Academy recognised this film in the Best Picture. Secondly, let’s take a moment to appreciate how bloody good this film is! The special effects and stunts are incredible. It’s visually stunning, visceral, fast, furious, and frenetic fun. It was great in the cinema, but it transfers well when watching at home as well, proving it is a great film, and much more than just a spectacle. I think it stands a slim chance of winning the top prize at the Oscars, but it certainly ranks very highly for me!

Whilst I “enjoy” Mad Max more, Spotlight deserves the top spot in this list, simply because it is an outstanding film. Meticulously well made, with the best ensemble cast performance I have seen in a long time. The slow unfurling of events is very tense, well thought out, and executed to perfection. I could find no faults whatsoever in this film, and it is easily the best out of the Best Picture nominees in my opinion.

Agree with everything I’ve said, or am I a terribly misguided idiot who has got it all wrong? Please let me know in the comments, and don’t forget to share as well.

One thought on “Ranking the 2016 Best Picture Nominees”