2003 saw a resurgence in quality Christmas films, after a slightly barren spell, with Bad Santa and Love Actually released along with Elf. It is strange how you wait for ages then three come along at once! Of these films Elf is the only one squarely targeted at the family market. Directed, and with a cameo, by Jon Favreau, this is his second full length feature film. He then moved on to direct Zathura, Iron Man 1&2 and, more recently, The Jungle Book live action remake.

Our story begins on Christmas Eve 1972 when Santa is delivering presents and, on delivering the gifts to an orphanage he leaves his sack open for a second and one of the orphan babies climbs in and gets taken back to the North Pole. On his discovery by the elves and Santa, he is taken in by Papa Elf and raised as his own. It soon becomes clear that Buddy (as he was named due to his diaper brand, a reference to the Back to the Future “Calvin Klein” gag) isn’t really an elf as he is waaay bigger than everyone and isn’t as able to create the mountains of toys that are required to be ready for Christmas like the other elves. On overhearing a conversation Buddy discovers his true nature as a human and Papa Elf tells him all about his real mum Susan, who passed away, and his real dad Walter, who doesn’t know of his existence and still lives in New York. Buddy sets off to meet his dad, even though Santa tells him that Walter is on the Naughty List!

As an outcast from the world of elves and Santa we watch as Buddy finds his way to the city (“I passed through the seven levels of the Candy Cane forest, through the sea of swirly twirly gum drops, and then I walked through the Lincoln Tunnel”) where it soon becomes obvious that he is different and incredibly naive. Still dressed in his elf outfit he scours the city to find Walter’s office but when he does, Walter has him thrown out, not believing his story that Buddy is his son.

Buddy finds some solace in Gimbel’s department store and goes about living in the place that is closest to his North Pole roots, the Christmas grotto. It is here that he meets Jovie, dressed as an elf, and is smitten leading to a blossoming romance. Needless to say, the film progresses apace with Walter slowly accepting Buddy into his life and, when Santa crashes into Central Park, Buddy saves the day with his elf-skills and with the help of those people that he has helped to believe again, their faith restored in Christmas and Christmas spirit is once again in evidence. 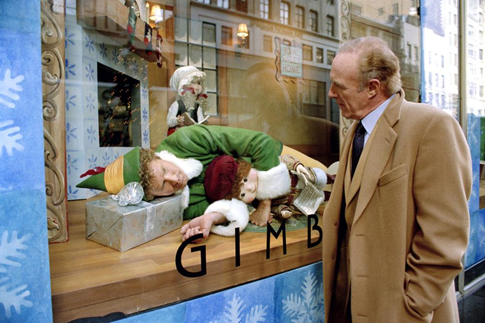 Elf is a voyage of discovery for Buddy as he spreads his unlimited Christmas cheer amongst all that meet him, his belief in Santa and Christmas is pure, child-like, unwavering and untainted by the cynical human world but the person he has to change more than any other is his grumpy, miserly dad Walter.  At its heart Elf is about being accepted for who you are, about realising what it is that matters most to you in life and the importance of family. All of that makes Elf sound like a serious film and it most definitely isn’t! Will Ferrell’s performance as Buddy is right up there with Anchorman’s Ron Burgundy, the energy he imparts into this performance is amazing, relentless happiness in the face of reality and the all important absurdity that Ferrell can bring. Much like the elf diet (4 main food groups: candy, candy canes, candy corn, syrup) there can be an element of this being too much, too over the top in his acting in this but then, it is a Christmas film and it is supposed to be funny and sentimental and generally loveable.

In Elf Ferrell and Favreau have created a Christmas behemoth. It wouldn’t be overstating that Elf is a modern Christmas classic film. It has all the elements needed and is definitely fun for all the family, of any age.

One thought on “Looking back on… Elf”