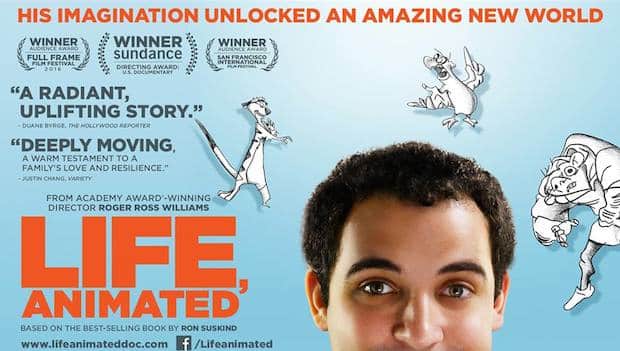 It was the end of last year where I completely feared all had been lost that I’ve ever felt good about in my overpowering bond with cinema. For the last two years, I felt like I disappeared right off the grid when it came to my relationship with movies, becoming less knowledgeable and starting to forget what made me love this amazing expressive art form in the first place. It was hard for me to find that one film to help remind myself why I enjoyed this industry in the first place and reignite my love for all things cinema again. Life, Animated is one such film that has managed to reconnect with me intellectually, emotionally and personally.

Why it struck a chord and resonated within me so deeply was for the sheer simple reason of undergoing (and enduring) the same personal life experiences that Owen Suskind goes through for the first time, in which this lovely and remarkable documentary does so well and manages to focus on in the most charming and heartfelt of ways.

Owen was born into such a loving and caring family consisting of his parents and older brother, Walter. Living the early and carefree life of such a normal and healthy child, everything suddenly changed for Owen by the time he turned the age of 3. Both his speech and communication came to an abrupt stop and sleeping at night was no longer a factor for him anymore. The world just became a confusing mess, translating any and all words that anyone ever said to him as nothing more than ‘complete gibberish’. After being taken to see speech therapists and such, Owen was diagnosed with autism. As this was back in the early 90s, hearing such a diagnosis being treated on their son was a rather difficult pill for any parent to swallow at that time; especially when autism wasn’t the kind of mental condition that was fully understood or commonly known back then as it is widely aware of now. You had to feel a great sense of sadness for the parents, having to process through their minds and come to the realisation how badly this condition will affect the family unit as a whole but still putting every effort into doing their best they can under such difficult circumstances.

As Owen had become completely shut off from the world for what felt like an indefinite time for the unforeseeable future, both his parents feared the worst – that they may have lost him forever. Its only upon the discovery of Owen finding absolute solace in Disney movies, that his father quickly learned how Owen was able to memorise any number of lines of dialogue from every Disney film ever made, as well as entire opening credits – which helped Owen to self- teach himself to read. He uses Disney as his only link to communicate again with other people and really just making sense with the rest of the outside world. Director Roger Ross Williams has managed to really tackle autism by getting deep into the mental psyche of Owen, how the inner clogs of his mind work and beautifully bringing this story to life based on the book written by none other than Owen’s father, visualised through drawn animation segments and snippets of some of the most beloved scenes from the Mouse House that have richly stood the test of time by having been embedded deeply into our own popular culture.

Owen also uses Disney to educate himself in the ways of the world that really are able to work for him in a way that he can easily understand and able to educate others with the life lessons he’s already learnt. He does this by creating his own Disney club with like-minded others who share the same condition as him. He screens films such as Dumbo, The Lion King and Aladdin, and then goes into deep discussion with the rest of his group of what they think makes these films so good and the feelings they experience from viewing them. This is evidenced as his first step into the real world of being able to live a healthy and independent life. At 23 years old, he makes the big move to study at University for the mentally handicapped, living on his own as a proper responsible grown up, experiencing his first heartbreak in life splitting up with his girlfriend and getting his first job at a local cinema.

Owen Suskind will soon realise that life isn’t like the movies and according to his father will fail and fail again before finally starting to succeed in life. In becoming more of an adult, Owen is able to prove a lot more reassurance and a sense of ease to his parents that there’s the affirmation he’ll be able to take care of himself when they get too old to no longer care for him. In addition to this documentary being a really enlightening one, it’s also sprinkled with some of the most humorous moments I’ve seen featured in one too. The biggest comical highlight being Walter struggling to explain to Owen the meaning of french kissing and sexual intercourse, and all the awkwardness that comes with that; resulting in maybe suggesting to his younger brother that introducing him to Disney porn will give him all the knowledge he will need when it comes to sexual education.

This documentary is an instant must-watch because not only does it teach you invaluable lessons in life while growing up but it also offers a truly uplifting and honest way of how family and love can help you perceive the world in terms of better overcoming some insurmountable life obstacles that the world can hit you with.

Going back to what I mentioned earlier of experiencing similar situations to Owen, films have helped me in more ways than one in really staying positive and giving me such great purpose in this world. I too have learning difficulties combined with several types of mental OCD, whilst having dealt with trouble at home in my upsetting and destructive relationship with my father, not to mention the massive amounts of bullying I was subjected to since primary school all the way right up to University. Watching films was my one way ticket of transporting myself to so many other magical and exciting worlds that are in no way as depressing as my own. Its movies like this one that helped me to open my eyes and realise that it’s okay to be a bit different from everyone else and feel less alienated. I’ve had to tell myself from time to time that I’m not weird or crazy, I’m just unique.

Movies have changed and transformed my life in ways I could never imagined and despite having some people tell me that I’ve been living in a dream fantasy world/cuckoo land and I need to seriously wake up to what’s going on in the real world, I know these are the kind of people who can never grasp the understanding of the power of cinema and how it can restore faith to one’s self and everyone and anything else that has ever mattered. In other words, they have nothing better to do than to take one big massive pile of shit over other people’s main interests in film just because it makes them feel big when in reality they’re just sad A-holes.