What’s not to love about Podcasts? They’re free, and easily downloadable to your smartphone, plus there is probably a podcast for every single topic you could possibly think of! Here is my pick of my favourite movie themed podcasts; make sure you check them out and also let me know your favourite podcasts and why in the comments below!

What is it?: Presenters James (also known as Mr Sunday Movies) and Mason, talk movies, comic books, TV shows, video games and sometimes friendship (their words!). Topics range from film reviews to best & worst, and occasional very heated Versus battles between fictional characters. They also talk you through all the latest movie news, stories and speculation.

Why should I listen?: Aside from being absolutely hilarious, this podcast probably covers the widest range of topics, with not just movies being talked about. Pretty much everything that’s current is covered. Also their rating system for movies inspired my own ratings, and Mr Sunday’s YouTube videos are also super interesting – particularly the Easter Egg ones and trailer breakdowns. I’d say there’s a lot of emphasis on comic book characters/movies so particularly great if you’re interested in that, but there’s enough content to keep everyone happy. They also have the best theme tune.

Best episode: Difficult to pick, but I loved episode 55 which includes the epic Superhero Showdown. Also listen to the first couple of episodes (before they got a proper theme tune) for interesting renditions of songs including “Hero” by Nickelback.

The Worst Idea of All Time 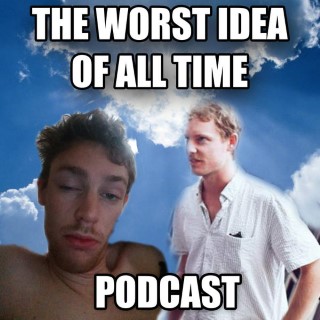 What is it?: Tim and Guy are two guys from New Zealand who watch the same terrible film every single week for a whole year. The first season was Grown Ups 2 and the second is Sex & the City 2.

Why should I listen?: I can’t really explain why this is so funny, it just is! I think the phrase “the struggle is real” sums it up – as the episodes progress Tim & Guy slowly lose their minds, talk crazy conspiracy theories, and struggle to find something good in a terrible film. Also just be thankful that you’re not the one having to watch SATC 2 every week for a whole year!! Obviously this isn’t the place to go for current movie news or reviews, but it is very very funny.

Best episode: Either Season 2, Episode 2 or Season 2, Episode 8. Episode 2 is mostly hilarious when listened to straight after Episode 1. Episode 1 was so full of hope, and Episode 2 conveys the utter despair as the weight of the challenge sets in. It’s a shame to laugh at someone else’s misfortune, but it’s just so damn funny! Episode 8 was recorded in front of a live studio audience so is more like a stand up show than a podcast, and the rant about “the drummer” is comedy gold.

Skip to the End (STTE)

What is it?: A movie review podcast from 3 British guys. Current movies, old movies, good movies and terrible movies; it’s all covered here!

Why should I listen?: I really enjoy the features on this podcast. In addition to news and a review of a current film, they also rewatch an old film (sometimes good, normally bad!), revisit a year and talk through the film highlights of that year, and lots more. Their style is really natural, just 3 mates talking about films, and they’re pretty funny as well!

Best episode: I really enjoyed episode 22. The main review is Jurassic World, but the rewatch is cult classic The Room. It’s hilarious whether you’ve watched The Room or not, and I fully support STTE’s plans to make The Room 2!

What is it?: PTDS answer all the important questions we’ve been dying to know, such as: How does Thor get a haircut? Is the Death Star a good weapon? And why does James Bond still have a job? They usually go catastrophically off topic with hilarious results.

Why should I listen?: Whilst the questions posed are interesting ones, don’t expect the most sensible of answers! However do expect hilarity – it’s a simple idea, but truly inspired!

Best episode: This was the easiest decision to make, the episode titled “who thought Quidditch was a good idea?” is perfection! I really don’t want to spoil anything, but just wait until you get to the “boulderhead” bit! Close runner up is “when does sentience begin in Toy Story?” It’s all well and good until a slightly less PG toy is mentioned. Warning: will lead to you laughing out loud and therefore strange looks if you’re listening at work/anywhere public!

See You Next Wednesday

What is it?: A toronto based film and pop-culture podcast, in which a roll of the dice determines whether the presenters will watch either a good film or a terrible film. There’s also some general movie news and chat, plus they also listen to an album each week and talk about that.

Why should I listen?: There’s something super relaxing about listening to this podcast; it’s totally hilarious but they’re also incredibly knowledgeable about films so you’ll come away feeling like you’ve learnt something and also with a ton of films you’ll want to check out. Their style is relaxed and the laughter is infectious. You’ll love this one.

Best episode: I really enjoyed Episode 171, in which they talked about Poltergeist, Inside Out and New York Minute. An incredibly long rant about a terrible Mary-Kate and Ashley Olsen film is always funny. Fact!

Whilst all of these are great, I think my favourite is The Weekly Planet, it’s the funniest, the presenters are great and I think they cover the widest range of topics; make sure you check it out! Also don’t forget to let me know your thoughts, and any movie podcasts which you love in the comments below!